I enjoy at least one pelagic every year.  They are my favorite type of bird treks because we go out on the waters. While I was in Puerto Vallarta, I did some research on the Marieta Islands. There were 2 sea birds that I needed to observe in the wild.  As with most of my work, I didn't need a guide; I just needed to get there and I'd find my own birds. That to me is the most rewarding thing about birding on your own.  You work for your birds and EARN them! I finally booked an ocean trek out with Vallarta Adventures which turned out to be quite fun.  And yes, it was a loud Mexican boat tour that promised "bird watching". Riiiiiiiiiiighttttttttt......... 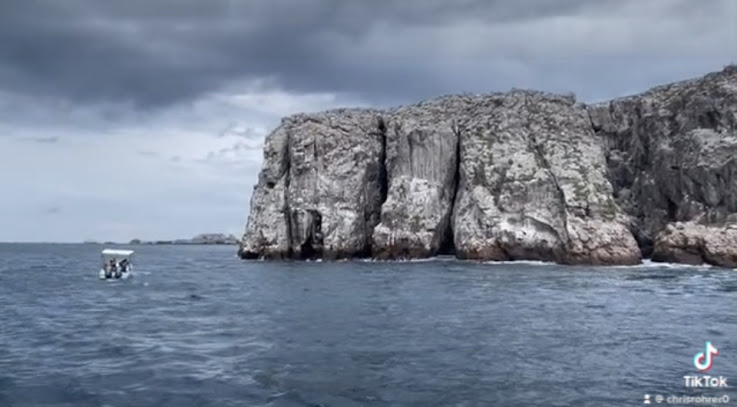 The boat ride out was quiet.  The tour guide was loud and yelling at us to wake up:) But we all resisted and I was thankful. This is a nature trek buddy! It was too early to be partying.  It felt like that alcoholic uncle who pressures you to start drinking with him at 9 AM.  Of course, the crew was excellent and very professional.  They danced and performed for everyone on the boat.  The main guide was the whip leader who made sure everyone was having a good time.  People saw me with my camera and binoculars and knew I was in serious mode. Kinda. Their hopes and dreams?  To go snorkling around the Marieta Islands and swim at some of the beaches. Mine?  The Brown Noddy and Bridled Tern that breed on those islands.  But it was more than that......I wanted to KNOW what type of sea birds breed along the Mexican coast of the Pacific Ocean.  I also wanted to see their conservation efforts. 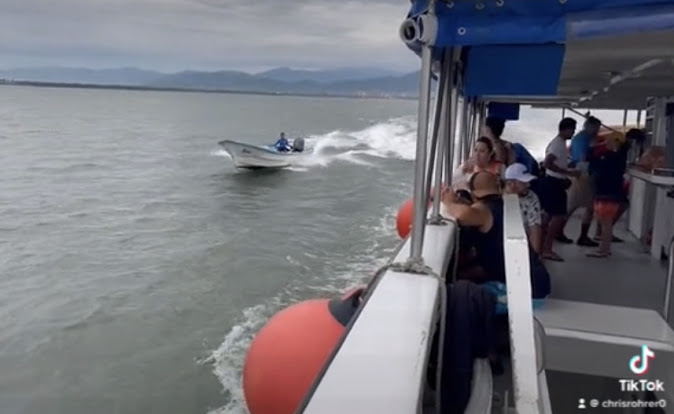 For much of the cheesiness that went on, the company was excellent with garbage control, conservation messages and turning off the music when we entered the waters around the Marieta Islands. They also warned everyone on board NOT TO FEED THE BIRDS.  And it was a good thing too!  There were hundreds of birds flying high above the boat. As our vessel docked, the passengers went off to snorkel in the strong currents.  I began counting birds on the rock ledges. And then a Brown Noddy flew past.  And then another. And another. Target one achieved and really fun.  Getting a photo is always difficult on pelagic trips.  The key thing to observe is a flight pattern to pick out the birds. The Brown Noddy flew low to the water and similar to a bat/tern. Not quite a storm-petrel and not quite a tern, even though it's in the tern family. Second. Listen for their sounds and recognize their flight path around the boat.  I think I took a million shots to get this nice one below. I don't know how the people were able to snorkel in that water, but they all came back alive. 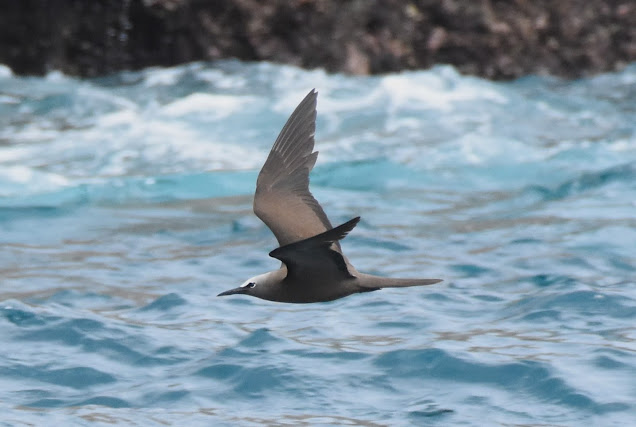 Brown Noddy
Also of note and importance were the numbers of Magnificent Frigatebirds, Laughing Gulls and Black Vultures.  They are the pirates of the birding world waiting for an opportunity.  The breeding birds on the islands, like the Blue-footed Boobies, have to constantly watch their babies or they get eaten.  In the pic below, look at the number of Frigatebirds in the air!  Opportunists waiting for a meal! 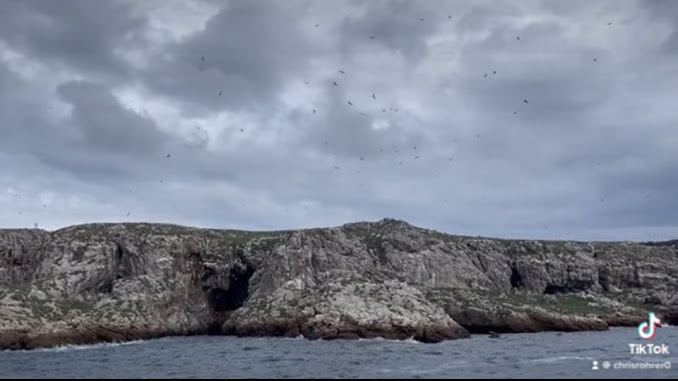 The islands were beautiful.  I imagine myself on them and how fascinating it would be to set up a tent there.  I'm sure there would be a lot of bird poo on my gear when all was said and done.  The rocky islands off the Pacific Coast of  the United States and Mexico hold a deep interest for me.  Each and every island chain holds a certain colony of sea bird.  Often many will overlap but there are some with a very tight range like the Ashy Storm-Petrel or Tufted Puffin.  So it was interesting to note nesting Brown Noddies and Bridled Terns on the Marieta Islands. After the passengers got back on board, the tour guide announced it was time for the "bird watching" portion of the trip.  What??!!!  The whole trip out was birdwatching.  But I knew what they meant.  They would spin the boat around the islands and I would get my one shot at the nesting Bridled Terns.  So they didn't lie.  People got to see birds but there wasn't any narration.  I helped out the people who were genuinely interested and asked me to identify the birds. Once we turned a corner on the main island, I was able to zero in on the colony of Bridled Terns.  It wasn't looking hopeful at first because every section of the island was colonized by different sea birds. Just not the terns. 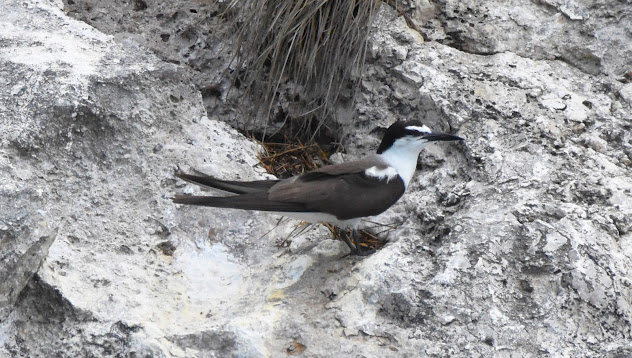 Bridled Tern
So how do you tell the difference between a Sooty and Bridled Tern?  Apparently Sooty have a darker back.  But that back looks pretty dark to me!  However, one more confirmation on a field mark that I obtained to confirm Bridled was how this tern nests.  The baby terns were exactly how the field guide described.....behind a bush near an enclosed rocky opening.  And once I spotted the adults, I quickly snapped area shots around the birds because the boat was going by too quickly.  At this point, nobody was watching the birds except me.  And that loud voiced guide talked about boobies.  You can guess that the boobies he was talking about weren't related to birds. That was the extent of the "bird watching". 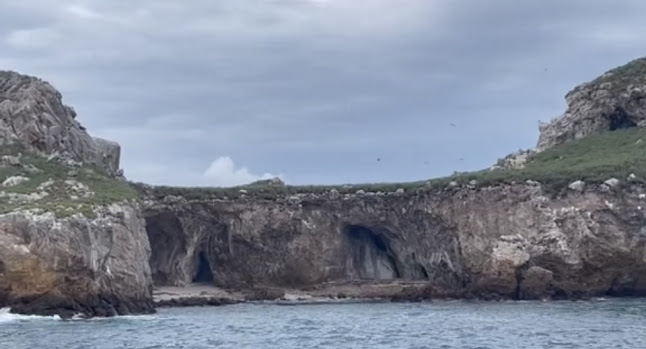 The Marieta Islands were declared a sanctuary for the endangered Blue-footed Booby.  It is a national park that was once used for Mexican military practice.  In fact, a bomb was dropped in the center of one of the islands and created a hidden beach.  Years later, the islands were protected to restore sea bird colonies and save the Blue-footed Booby and Red-billed Tropicbird nesting sites. 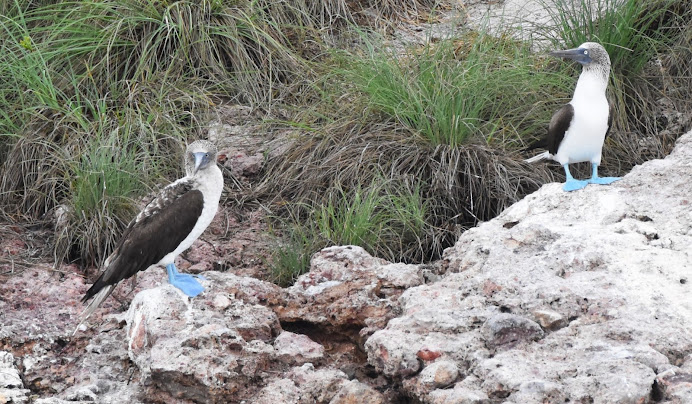 Blue-footed Boobies
I saw many Blue-footed Boobies and they numbered well into the hundreds, if not thousands. That was a good sign.  Some Brown Boobies were also mixed into the bunch including a Red-footed Booby!  I searched and searched for a Nazca or Masked Booby but no luck.  A Masked Booby was reported the week before and it would have been a lifer.  However they are mostly vagrants around the area.  In any case, many of the tours highlight and feature the Blue-footed Booby in their packages. 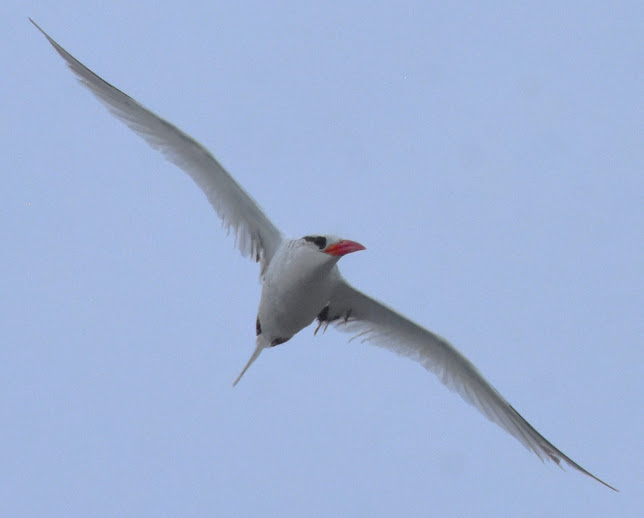 Red-billed Tropicbird
The gray dark skies were a perfect backdrop for many of the white sea birds.  I can always pick out the Red-billed Tropicbirds by their flight.  There were hundreds of birds in the sky but ONE was flying differently.  When my eyes locked onto the bird, I got excited.  This seems to be my spirit bird.  So many people chase this bird and dip, but on almost every pelagic each year, I find one, even in rare areas.  I think it's because I see the flight patterns of all the birds at once and can sort out all the varied aerial flight paths.  And with tropicbirds, it's a more graceful dance in the air that catches my eye. It's a slow graceful flap with a wide angular flight.  I'd also say that it's the most graceful ocean bird out there.  Although I think the frigatebird is the trapeze artist of the air while the boobies are slick bombs that dive into the ocean. Storm-petrels are aquatic tap dancers. I admire each of the species for their unique talents.

Magnificent Frigatebirds
On one part of the island, there was this sprawling cactus.  It actually reminded me of a giant night blooming cereus.  I was shocked by how these plants made the frigatebirds look tiny!  There were huge numbers perched in this entangled forest of cacti.

Laughing Gulls with Magnificent Frigatebirds
The picture above makes me laugh.  Well, I mean it is a Laughing Gull who looks to be leading the pirates on a raid.  The female frigatebirds listen with anticipation. But I'm really wondering what's going on here. I'm thinking the frigatebirds are protecting their nests from these gulls. 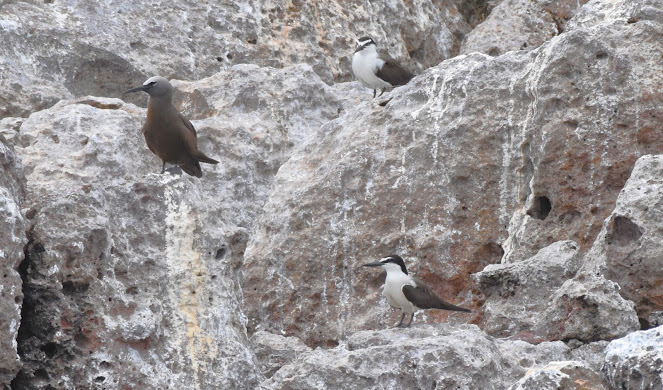 2 lifer ticks!
If I were a ticker, this is the only pic I would need.  Both my lifers are in this shot.  Then I'd go home with my checklist and cross them off my list because they're just a tick.  Thankfully, I'm not a strict ticker.  I laughed at my fortune here though.  It's not everyday you get all your target birds in one shot. The day was super enjoyable and the open bar just enhanced the celebratory mood on the vessel.  Now everyone was awake and having fun. I felt bad for a guy who asked me if I was a birder.  I told him that I was and then he told me his boyfriend was also a birder. Unfortunately he got covid and had to stay in his hotel.  I asked him if he liked birds and he said "hell no".  That made me laugh.  Sadly, he had to go alone on the trip. 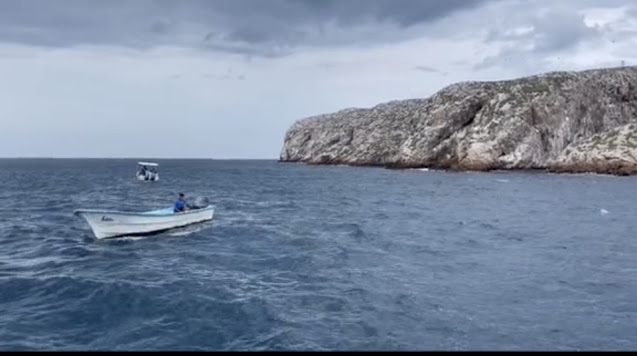 As we left the island, we passed closely by a group of boobies.  It's not often I see them so I tried to memorize their group chatter.  It takes a lot of effort to get out to these rocks.  For those who get sea sick, this boat ride was fine.  Sometimes I'd forget I was on a boat because it was smooth sailing.  The trek from Puerto Vallarta was about an hour.  We saw dolphins, sea turtles, and manta rays. 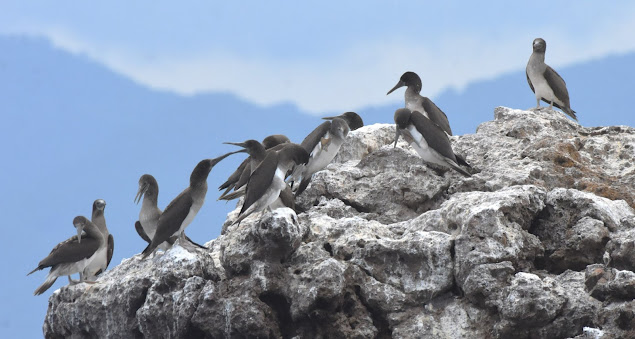 We headed to our next destination which was the hidden beach where people can go to swim.  For about an hour, everyone jumped into the water and enjoyed the beach.  You can hike to this spot from Puerto Vallarta but it'll take some time. 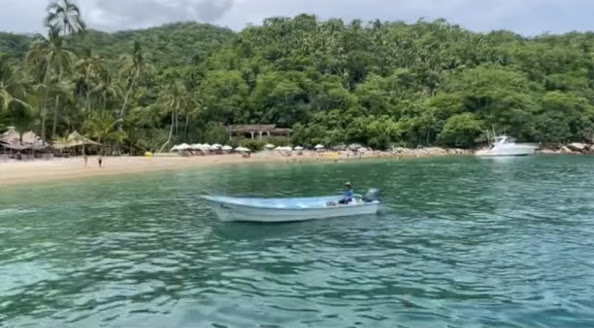 I sipped my drink, chatting with new friends.  The captain and his crew put on a performance for everyone.  There were lots of laughs as they performed old rock tunes.  At one point, the captain dressed up in women's clothing.  Someone commented about how supposedly straight men liked to dress up in women's clothing around Puerto Vallarta.  It's a thing.  I didn't realize it until I heard the comment. 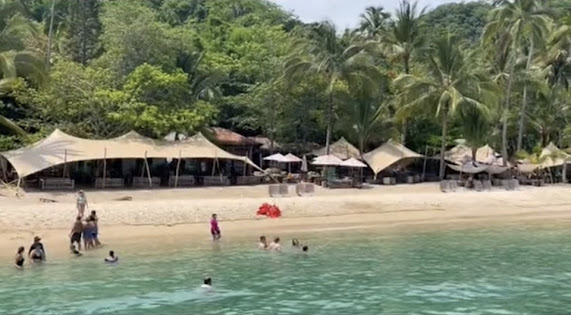 I did my research and it was a really fun day.  I took the Uber home after we docked at port (a little buzzed).  Vallarta Adventures is made for entertainment. Book online for a discount. The lunch was amazing, but the views were even better.  And that open bar! Birders need to study their birds before they go, especially if you are not familiar with sea birds. The bird watching part means literally just that....look at the birds. You won't have anyone pointing out the Bridled Terns except maybe, "oh look!  There's a tern over there!" There weren't many species of birds but there were thousands of great birds flying around us. For more info, click on the ebird report here. On my report, I'm much more conservative on the counts, but I will say that there were thousands of birds on those islands flying around.  I just counted birds on one of the islands even though I couldn't see the entire island. From my impressions, these islands look healthy and well protected.
Here is a video I created before I lost left my phone in the Uber. That's another story.  I did screen shots on this post to illustrate the writing. Anytime, I do a pelagic, I feel at peace.  On our next outing, we visit Rancho Primavera and our local guide Antonio Robles for a little help finding a somewhat difficult endemic hummingbird. Until next time....
Labels: birding Mexico Blue-footed Booby Bridled Tern Brown Noddy Laughing Gull Magnificent Frigatebird Marieta Islands Red-billed Tropicbird 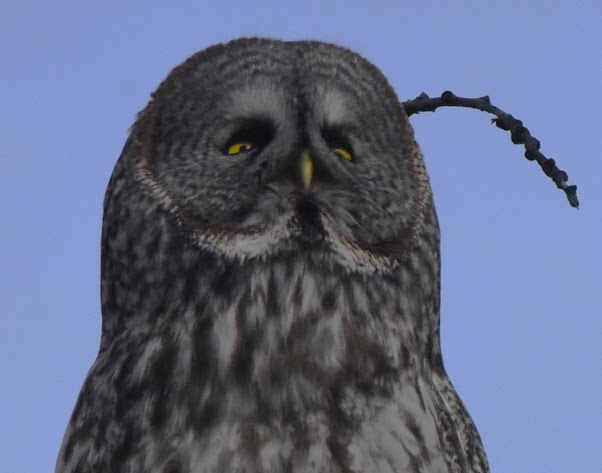 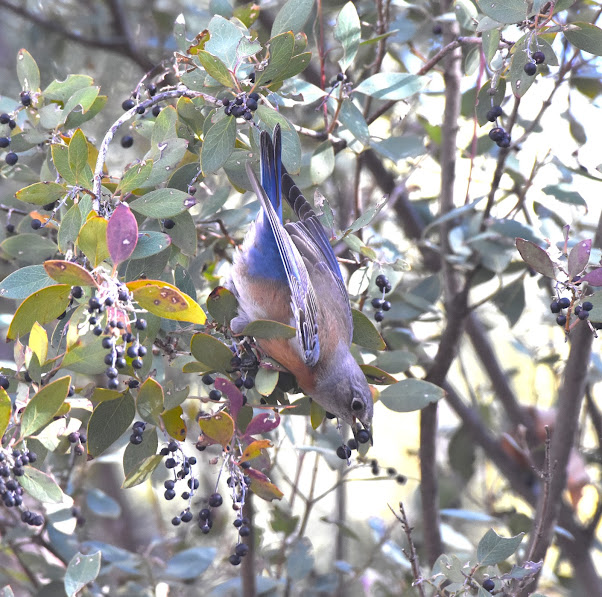 The Day to Day Life of a Birder